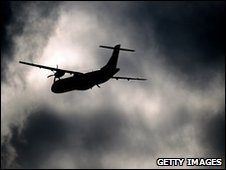 The Irish Aviation Authority (IAA) has announced flight restrictions at six airports from 0000 BST on Friday because of a risk from volcanic ash.

The restrictions at Shannon, Donegal, Knock, Galway, Kerry and Sligo airports will be staged and will remain in place until 1300 BST on Friday.

The IAA said the ash cloud from Iceland was encroaching on Irish airspace along the west coast of Ireland.

"The restrictions are required as the increased level of recent volcanic activity has created a massive ash cloud stretching 1,000 miles long and 700 miles wide," an IAA spokesperson added.

He said that the situation would be reviewed at 0900 BST on Friday.

The details of the airport closures on Friday are as follows:

Flights in and out of Northern Ireland have resumed following restrictions earlier in the week caused by the volcanic cloud.