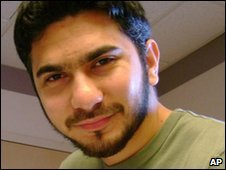 A man accused of attempting to set off a car bomb in New York’s Times Square has given "useful information" to investigators, a top US official says.

Mr Shahzad, arrested on Monday, has yet to appear in court. He faces terror and explosives charges.

A law enforcement official said Mr Shahzad had opted to waive his right to an initial court appearance.

Mr Shahzad has been charged with attempting to use a weapon of mass destruction, attempting to kill and maim and other terror charges, and if convicted he faces life in prison.

"During ongoing questioning by federal agents, Shahzad has provided useful information and we will continue to pursue a number of leads as we gather intelligence relating to this attempted attack," Mr Holder told a US Senate sub-committee on Thursday.

"Mr Shahzad is in fact continuing to co-operate with us."

Mr Holder rejected the notion that offering Mr Shahzad the right to remain silent under police questioning had hindered the investigation.

A senior US intelligence official told the Associated Press news agency that before investigators told Mr Shahzad of his rights to keep silent and to an attorney – known in the US as Miranda rights – "they got what they needed".

Investigators wanted to know whether other attacks were imminent and who aided Mr Shahzad.

After nearly eight hours of questioning, investigators officially advised Mr Shahzad of his rights, ensuring subsequent statements could be used in court.

US network ABC News has reported that Mr Shahzad told investigators he was angry because friends had been killed by CIA strikes in Pakistan, his personal life was in crisis, and he feared for the safety of his family if he did not carry out the bombing mission.

David Cole, a professor of criminal and constitutional law at Georgetown University, told the BBC that, in the US, criminal suspects can waive the right to an initial court appearance.

Given the circumstances under which he was arrested – while apparently attempting to flee the country – and the gravity of the crimes with which he was charged, Mr Shahzad may have seen little to gain by appearing in court, Mr Cole suggested.

When the case makes it a courtroom, the burden will fall to the prosecution to prove that Mr Shahzad did in fact waive those rights freely from coercion, Mr Cole said.

It was unclear on Thursday whether Mr Shahzad had retained a lawyer. Mr Cole said the judge appointed to the case would probably select one for him.

Investigators are reportedly working to connect Mr Shahzad, a naturalised US citizen, to terror networks in Pakistan, his native country.

According to government court papers, Mr Shahzad has admitted planting the bomb and said he was trained in bomb-making in Waziristan, a tribal region of north-west Pakistan.

New details have also emerged suggesting that he bungled several aspects of his alleged attempt to set off a bomb laden with propane gas, chemical fertiliser, fireworks and petrol.

The 1993 Nissan Pathfinder was left with its engine running and hazard lights flashing in Times Square on Saturday evening. The bomb was discovered and dismantled after a street-vendor alerted police.

Among pieces of evidence found in the unexploded vehicle was a set of keys left in the ignition, which law enforcement officials say belonged to Mr Shahzad’s getaway car and his home.

Without his car key Mr Shahzad allegedly took the train home, found another key and returned for the car before attempting to flee aboard a Emirates flight to Dubai.

The trail which led to the arrest of Times Square bomb suspect beganwith the discovery of a suspicious car early on Saturday evening, 1 May, close to New York’s busy Times Square.

The Nissan Pathfinder was caught on cctv cameras arriving in TimesSquare just before 1830 EDT. A street seller raised the alarm when he noticed the car parked with its engine running and hazard lights flashing.

Police evacuated Times Square. In the car’s boot they found all the ingredients for a homemade bomb including propane gas cylinders, fireworks and two clocks, a metal gun locker containing fertiliser.

From the car’s vehicle identification number, police traced the woman inConnecticut who sold the car to Faisal Shahzad (pictured). She also gave police a mobile phone number and helped identify him from photographs.

Faisal Shahzad lived in this Bridgeport building. Mobile phone records showed he made several calls to Pakistan and to a fireworks store in Pennsylvania. Court documents said he had received bomb-making training in Pakistan.

Police arrested Mr Shahzad at 2345 EDT on Monday 3 May after he boarded a flight en route to Islamabad, Pakistan. Although his name was on a no-fly list, he had been allowed onto the plane.