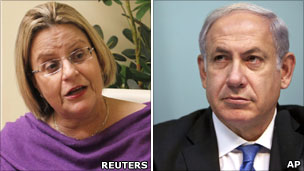 Israel’s prime minister Benjamin Netanyahu has phoned a Republican congresswoman in the US to clarify his praise of remarks by former Cuban leader Fidel Castro.

Mr Castro had criticised the Iranian president’s denial of the Holocaust in a September interview in The Atlantic.

Mr Netanyahu welcomed that criticism for its “deep understanding”.

But Cuban-born US Representative Ileana Ros-Lehtinen urged Mr Netanyahu to retract his comments.

The congresswoman has long been a vocal critic of Mr Castro and she represents Florida’s 18th Congressional District, which has a large community of Cuban exiles.

Ms Ros-Lehtinen told Politico: “I just said look, this guy has been an enemy of Israel, just because he said something that a normal person would say – after 50 years of anti-Israel incitement, it’s one phrase from an old guy who doesn’t even know where he’s standing.”

But the prime minister’s office told Haaretz newspaper on Wednesday that Mr Netanyahu’s remarks “referred only to a specific article”.

Mr Netanyahu called the congresswoman when he was in the US a few weeks ago and his office said: “The prime minister made clear he hasn’t changed his position on a number of other things Castro said over the years, including over the past year, on the state of Israel.”

US relations with Cuba are still virtually non-existent, with a 50-year-old US trade embargo against the island still in place.

The Cuban leadership has often been critical of Israel’s actions, as have other leftist Latin American governments.

It is understood that Israel had seen the potential in Mr Castro’s remarks for a diplomatic raprochment between Tel Aviv and Havana.

President Shimon Peres had also welcomed Mr Castro’s remarks, writing a letter to the former Cuban leader saying the comments were “a surprising bridge between the hard reality and a new horizon.”