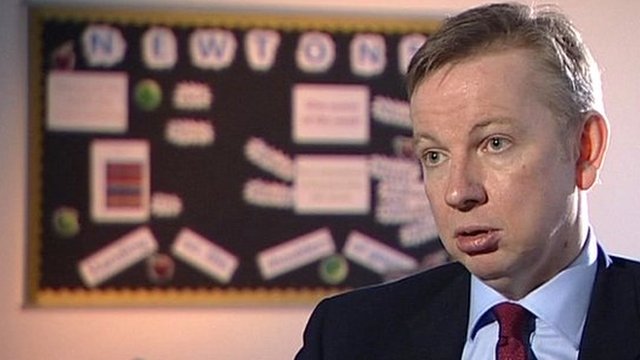 Michael Gove: “The government has a duty to intervene when schools are failing”

A reform of teacher training will be at the heart of plans to overhaul what and how pupils are taught in England’s schools.

Education Secretary Michael Gove’s wide-ranging White Paper will signal a return to a traditional subjects and a push to improve discipline and teaching standards.

And he will also set schools higher baseline targets for exam results.

This means an extra 439 secondary schools could be labelled failing.

Mr Gove said England should be measuring itself against its international competitors, many of whom had been improving at a faster rate.

His schools White Paper, entitled The Importance of Teaching, to be published on Wednesday lunchtime, will set out plans to improve the quality of teacher trainees.

Research suggests good teachers are the biggest influence on children’s education and the government has already said it wants to see higher quality candidates becoming teachers.

“Head teachers have to be captains of their ships”

So new recruits will face an aptitude test to assess their suitability for the job.

But Mr Gove said the “fun and enjoyment” had been squeezed out of the teaching profession in recent years by top-down targets and over-prescriptive policies.

He planned to free them up by reducing these and radically reducing the size of the obligatory part of the national curriculum,

Mr Gove wants to see more on the job training, with teachers training in schools rather than in theoretical college-based classes.

He told BBC Radio 4’s Today: “I would like to establish a new chain of teaching schools, like teaching hospitals, truly outstanding schools, that have excelled in the past where new recruits from university can spend time observing great teachers and being observed themselves.”

He will also encourage former members of the armed forces to retrain as teachers by funding their training.

In opposition, the Conservatives talked about the merits of people going from the military into the classroom to instil order and inspire pupils.

There will be further efforts to persuade people who have had successful careers elsewhere to go into teaching through a version of the current Teachfirst scheme, to be called Teachnext.

Mr Gove will also confirm a number of measures to enforce school discipline.

This includes honouring a long-standing promise to give head teachers the ultimate say over who they can permanently exclude from schools.

In a BBC interview, Mr Gove said: “I am clear that schools have to have control of discipline and head teachers have to be captains of their ships.

But he said heads would have to ensure that there was suitable provision available for them elsewhere.

He is also likely to confirm plans to give teachers anonymity when facing allegations of wrongdoing and remove the need for 24 hours notice to be given ahead of detentions.

The education secretary will also confirm plans to create a new benchmark for school achievement under what will be called an English baccalaureate.

This will mean pupils will be encouraged to take GCSEs in English, maths, a science, a modern language and a humanities subject.

He believes too many schools opt for softer subjects in a bid to boost their league table position.

Mr Gove said: “I don’t think that we should say to children just because they come from a certain background that they shouldn’t expect to have any understanding of this country’s history or learn a foreign language.”

And there will be higher baseline targets for underachievement.

Schools will be considered to be “underperforming” if fewer than 35% of pupils achieve five good GCSEs (those graded A* to C).

Currently, the level is 30% and, based on 2009 data, the change would mean 439 schools would be classed as underperforming.

Mr Gove has already announced extra funding to allow struggling schools to be taken over by successful heads.

He has also warned that he is ready to use powers enshrined in the Academies Act passed this summer to force such schools to become academies under new management.

However, those below the standard but “making good progress” would get leeway.

Mr Gove told the BBC it was “not right” to have schools where two-thirds of children were not getting five basic GCSEs.

“There will be winners but there will also be losers. I don’t think education has to be like that. I want to have all schools as good schools and I’m not convinced Michael Gove has a plan to make that a reality,” he said.

She added that the White Paper was history repeating itself.

“The last time the Tories were in government they left behind the worst teacher recruitment and retention crisis in history.”