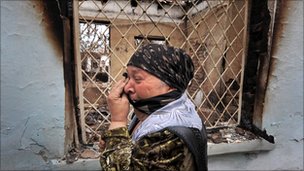 Seventeen ethnic Uzbeks have been jailed for life for their role in deadly clashes in southern Kyrgyzstan.

The men were convicted of mass murder and rioting. Two others were sentenced to 25 years.

Nearly 400 people died in the clashes in June between Kyrgyz and minority Uzbeks – a majority of the casualties are thought to have been Uzbeks.

The riots followed weeks of political turmoil after the ousting of President Kurmanbek Bakiyev in a mass uprising in April.

At the trial in Suzak region, southern Kyrgyzstan, 19 defendants, all of them ethnic Uzbeks, were found guilty of mass murder and rioting.

It was one of many violent incidents that took place during a week of fighting.

A lawyer who represented four of the defendants said the judge’s decision was politically motivated and that her clients’ guilt had never been proven, the BBC’s Central Asia correspondent Rayhan Demytrie reports.

She also claimed that her clients were forced to confess under duress and that during the court hearings they denied their earlier statements.

Several lawyers who have been working on cases related to the June violence have told the BBC that they have been threatened by relatives of the victims and unknown groups of people who attend court hearings and behave aggressively.

The lawyers also claim that the relatives of the defendants are often too frightened to attend trials because they have also been subjected to physical abuse.

Human rights groups have been calling on the Kyrgyz authorities to ensure security for the defendants and lawyers at trials.

While some ethnic Kyrgyz have also been tried in cases related to the June violence, human rights organisations say that ethnic Uzbek defendants outnumber the Kyrgyz.

Since the violence the new authorities, led by President Roza Otunbayeva, have created the first parliamentary democracy in Central Asia.

Earlier this month Ms Otunbayeva denied any ethnic bias in the trials.