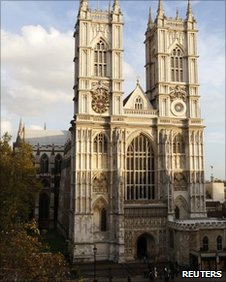 The couple, both 28, got engaged while on holiday in Kenya in October.

Prime Minister David Cameron said it would be “a happy and momentous occasion” and would be marked by a public holiday.

The Royal Family and the Middletons will pay for the wedding itself, but the taxpayer will meet the cost of extra security and transport.

Westminster Abbey has hosted the weddings of the Queen and Queen Mother and was the venue for Princess Diana’s funeral in 1997.

The prince’s private secretary, Jamie Lowther-Pinkington, said the couple wanted a spring wedding and chose the abbey for its “staggering beauty”, 1,000-year royal history and its feeling of intimacy despite its size.

He said William and Kate were “calling the shots” on the wedding plans, but had a “rather large supporting cast” to help them.

“We know that the world will be watching on April 29, and the couple are very, very keen indeed that the spectacle should be a classic example of what Britain does best,” Mr Lowther-Pinkington said.

“Prince William and Catherine have made it very clear that they wish everybody to be able to enjoy the day with them.

“Consequently, the day will be a proper celebration for the nation and the realms.

“Having said that, the couple are very mindful of the current situation, and for example, Prince William has already expressed a clear wish that any involvement by the armed forces should rely in great part on those servicemen and women already committed to public and ceremonial duties.”

The Dean of Westminster, the Very Reverend Dr John Hall, welcomed the couple’s choice of venue.

“We are very pleased they have chosen Westminster Abbey for their marriage and look forward to the detailed planning for what will be a great and happy occasion for the couple themselves, for their families and friends, for the country and Commonwealth and for well-wishers across the globe,” he said.

The extra holiday will fall in the same week as Easter Monday, giving millions of workers in England, Wales and Northern Ireland a three-day week. 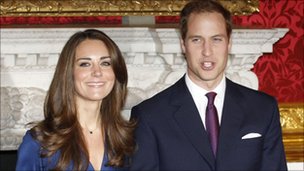 Mr Cameron said: “We want to mark the day as one of national celebration, a public holiday will ensure the most people possible will have a chance to celebrate on the day.”

Public Holidays are devolved in Scotland and the Scottish government is yet to announce whether it will follow Westminster’s lead.

However, the BBC understands that ministers in Scotland are expected to agree to the move when the cabinet meets on Tuesday afternoon.

The wedding date falls six days before the Holyrood elections on 5 May. As 28 working days, including public holidays, are needed between dissolving parliament and polling day, parliament could be dissolved a day earlier than expected.

Mr Lowther-Pinkerton said the couple were “completely over the moon” about their engagement.

The Press Association reported that a concert in Hyde Park had been proposed to coincide with William and Kate’s wedding.

It said a senior royal aide had refused to confirm the suggestion but had added: “Their view on it would be, ‘Let’s have a party.'”