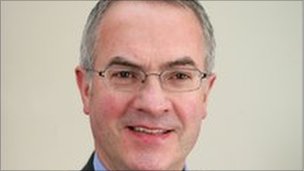 The social development minister said he intends to oppose 10% cuts in housing benefit for people who are on Job Seeker’s allowance for more than a year.

The measure was announced by the government as part of its £18bn in welfare cuts.

Alex Atwood the plans would leave more than 22,000 people in NI on reduced housing benefit.

He said his department was working with experts to try and find a resolution.

“There is an issue of fundamental fairness,” Mr Atwood said.

“I recognise there is also an issue of parity. I do not shirk from any of this, and I believe we should at least begin to address all of this.”

Mr Atwood added that there may be opportunities to protect those in need without compromising parity with UK welfare.

The new proposals would effect a wide range of benefits.

In his statement on Tuesday Mr Attwood said the Assembly passed a motion on welfare reform on 28 September.

The motion acknowledged Northern Ireland’s high dependency on social security benefits and suggested that reforms that simplify the social security process and helped people to get back to work would be supported.

The motion also highlighted the importance “for the special social and economic circumstances” of NI to be carefully considered.

It called for “appropriate measures” to ensure that the proposed welfare reforms do not have a disproportionately negative impact on Northern Ireland.

Speaking on Tuesday Mr Attwood said while Social Security is a devolved matter the department constrained by funding issues.

“There are principles around some of the Universal Credit proposals that may have some attraction, providing for simplification of the system, clearer conditionality and better financial support for those moving off benefits into work,” he said.

“There are, however, many changes to the level of benefit support, that are already being introduced that will make a significant reduction to the support available through social welfare, that will impact on tens of thousands of our people and will have a depressing effect on our regional economy.”

“I have engaged on an ongoing basis with London Welfare Ministers who are in no doubt of my view that be it on the Budget or on benefits,, the particular circumstances here – higher levels of deprivation (as in parts of Britain), compounded by the legacy of conflict and with the risks of alienation going forward – means that London should have a particular response to our needs.”

Mr Attwood added that he believed the planned changes should be implemented in a way that recognises the areas of high unemployment and the special circumstances of Northern Ireland.

“I will argue for the maximum flexibility to be allowed to us in implementing any changes.”