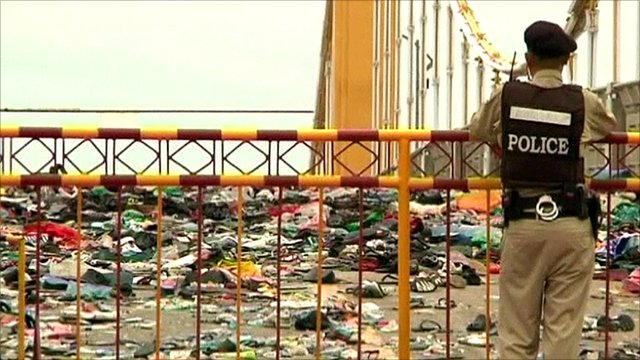 Daylight revealed the aftermath of the Cambodia stampede

Cambodia has declared Thursday a national day of mourning after at least 345 people were killed in a stampede in the capital Phnom Penh.

Hundreds more were injured when people were crushed on a small island on the final day of the Water Festival.

The stampede took place on a bridge, which eyewitnesses said had become overcrowded.

Prime Minister Hun Sen ordered an investigation into the cause of the disaster.

Hun Sen described the stampede as the “biggest tragedy” to hit Cambodia since the mass killings carried out by the Khmer Rouge regime in the 1970s.

He ordered all government ministries to fly the national flag at half-mast.

“Most of the deaths were as a result of suffocation and internal injuries,” he said.

Authorities had estimated that more than two million people would attend the three-day festival, one of the main events of the year in Cambodia.

Panic broke out after a concert on Diamond Island, which followed a boat race on the Tonle Sap river regarded as a highlight of the festivities.

Sean Ngu, an Australian who was visiting family and friends in Cambodia, told the BBC too many people had been on the bridge.

He said some of the victims were electrocuted.

“There were too many people on the bridge and then both ends were pushing,” he said.

“This caused a sudden panic. The pushing caused those in the middle to fall to the ground, then [get] crushed. 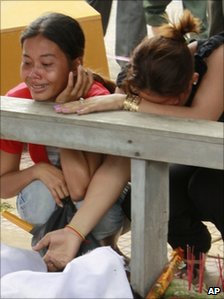 Many of the dead appeared to be teenagers

“Panic started and at least 50 people jumped in the river. People tried to climb on to the bridge, grabbing and pulling [electric] cables which came loose and electrical shock caused more deaths.”

“It was packed. People were pushing each other and I fell,” Khon Sros told the Reuters news agency from her hospital bed. “People were shouting ‘go, go’,” the 19-year-old added.

She said she had been pinned in the crowd from her waist down until police pulled her out.

“One man died near me. He was weak and didn’t have enough air.”

Revellers lingered in tears as the bruised bodies of youths in party clothes were carried away from the bridge, which was still decked with bright lights from the festival.

Many of the dead appeared to be teenagers.

Calmette Hospital, Phnom Penh’s main medical facility, was filled with dead bodies as well as the injured, some of whom had to be treated in hallways.