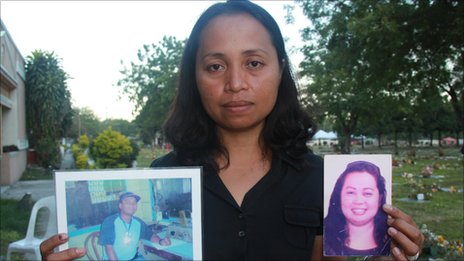 Grace Morales lost her husband and sister in the Maguindanao massacre. “When my kids ask what happened to their father, I can’t answer,” she says.
Related stories

A year ago in the southern Philippines 57 people were brutally murdered and their bodies dumped in a mass grave. While some key suspects are now on trial, more than 100 remain on the run.

Grace Morales goes to the cemetery near her home at least once a week. The graves she is looking for are right at the back, in a separate section roped off from the rest.

Her husband and sister were among 57 people killed a year ago, in the largest massacre in recent Philippine history.

“At first I didn’t believe it – I just didn’t,” she says, welling up with emotion.

Rossel Morales and Marites Cablita are buried next to each other, along with 10 others – all of them friends, all journalists who found themselves in the wrong place at the wrong time, caught up in a row between two powerful clans.

The Ampatuan family had been running the province of Maguindanao as a virtual fiefdom for about 20 years – occupying almost all the political posts in the area.

But in the elections for provincial governor, a rival emerged from another influential clan, the Mangudadatus.

“I can’t forgive them, I keep praying that God will curse them”

To stamp out this threat, the Ampatuans allegedly decided to kill their opponents.

It is a charge the family vehemently denies, but what is certain is that when the Mangudadatus set out to register their candidate for the poll – taking more than 30 reporters with them – they were stopped by a group of gunmen.

The bodies of the entire convoy were found later that day on a nearby hill.

A year on, there is little physical evidence that such brutal murders ever happened. The mass grave where the killers buried their victims is overgrown with grass, and the only reminder is a small piece of police tape tied to one of the trees.

The emotional scars, though, will take a lot longer to heal.

“When my kids ask what happened to their father, I can’t answer. I just let my tears flow and keep silent,” says Grace Morales. 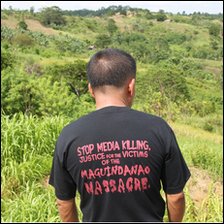 Esmael Mangudadatu, the man whom the Ampatuans were allegedly trying to target, was not in the convoy on that fateful day.

In the months that followed, he campaigned for and won the election.

But victory came at a heavy price; his wife and two sisters were among those killed. He had sent them and other female relatives to file his papers in the belief that their lives would be spared.

The Ampatuans are “like monsters. I can’t forgive them, I keep praying that God will curse them”, he says.

A year on, Governor Mangudadatu still has concerns about his security – only about a third of the 197 people charged over the massacre have been arrested.

The rest, many of them members of the Ampatuan family or their 2,000-strong private army, are still on the run.

“Locating them is very hard,” says the military commander for the area, Colonel Mario Mendoza.

“We’re a new unit, we need to pay informants to identify them for us – we don’t know them personally.”

“I’m begging the president, begging officials in government to help us get these people,” says Governor Mangudadatu.

He is not entirely confident of the abilities of the police and army to round up the suspects.

Many of those on the wanted list were members of the police. Can current police officers really be relied upon to arrest them?

One suspect, Jimmy Ampatuan, even managed to win a local election last month, while technically on the run. He was finally arrested after the poll.

Another problem for Governor Mangudadatu is that more than 20 Ampatuans are still in positions of power – some of them replacing other family members now in jail – and he has to work with them on a regular basis.

“Not all of them are bad. Some are co-operating with me,” he says, “but some are not.”

While the hunt continues for many of the accused, the key suspects, at least, are behind bars. They are on, or awaiting, trial in Manila – hundreds of miles away from Maguindanao.

Attention is currently focused on the trial of Andal Ampatuan Jr, who is accused of personally killing many of the victims, as well as ordering his henchmen to kill others.

He has yet to take the stand, but his lawyer Sigfried Fortun says he is planning to put up a strong defence. 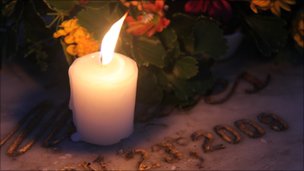 “The Ampatuan family controls 33 out of 36 municipalities, or thereabouts,” says Mr Fortun.

“Why would anybody who controls 85% of the votes of the province have anything to do with the killing of a political opponent, from which any blame would definitely rebound on to him?”

Andal Jr’s father and brother will be tried separately, as will other family members, and some 700 people are due to give evidence. With the court sitting just once a week, it is likely to be a painfully slow process.

A senior congressman, Senator Joker Arroyo, told the media that, at this rate, the process would take an estimated 200 years.

Meanwhile there are allegations that some of the witnesses and relatives of the victims have been offered bribes, and several would-be witnesses have been killed in as yet unexplained circumstances.

The Philippine judicial system is under scrutiny as never before, and President Aquino has personally pledged to make sure justice is done.

For Grace Morales, left to bring up her children and those of her sister alone – and using any spare money to fly to Manila to attend the trial – justice cannot come soon enough.