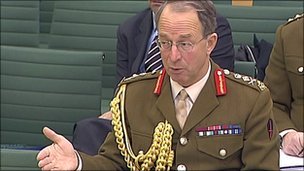 The head of the UK’s armed forces has defended planned defence cuts, saying military planning has to adapt to the resources available.

Chief of the Defence Staff, Gen Sir David Richards, said the cuts meant trading the perfect for the acceptable.

He told the Policy Exchange think-tank in a speech that no general worth his salt based plans on wishful thinking.

Defence spending is to fall by 8% over four years under plans announced in last month’s strategic defence review.

Harrier jump jets, the Navy’s flagship HMS Ark Royal and planned Nimrod spy planes were also axed, with the loss of 42,000 Ministry of Defence and armed forces jobs by 2015.

In his speech in London, Gen Richards acknowledged that the review involved “calculated judgements” over which military capabilities should be axed.

But he warned the government that long-term plans depended on a return to real term spending rises once the cuts were over in 2015.

He said: “A plan is not a plan if it doesn’t take into account the resources available. It is a wish list and no general worth his salt bases his plan on wishful thinking.”

He said the strategic defence and security review had been no different “and builds on the reality of the position in which we find ourselves”.

That, of course, has required people to make judgements that trade the perfect for the acceptable, he added.

He said it was essential to understand that economic strength underpinned a nation’s military strength.

He cited the Soviet Union as an example of a country which had got the balance wrong when it went bankrupt trying to match US defence spending.