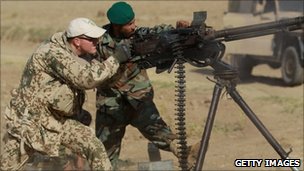 Germany is to suspend conscription in July 2011 and switch to a volunteer military service, defence minister Karl-Theodor zu Guttenberg has said.

Conscription of German men will end but will remain in the country’s constitution, Mr zu Guttenberg said.

Currently all young German men are called to serve, but conscientious objectors can opt for social work.

Volunteers would serve between 12 to 23 months and be able to deploy abroad after six months of service.

Currently, around 7,000 troops are abroad at any one time.

The government hoped that the reforms would allow for at least 10,000 soldiers to be deployed in the future, the defence minister said.

Germany is one of the few Nato countries to retain the draft, which was introduced after World War II to ensure that the military would never again become an elitist force with its own political power.

The BBC’s Steven Evans in Berlin says that conscription remains popular, with opinion polls showing a majority of Germans in favour.

The government is suspending the measure to avoid rewriting the constitution, but nobody foresees the resumption of the draft, our correspondent says.

Parliament is expected to pass the reforms in December.