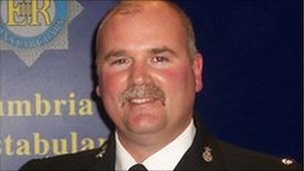 A community vigil has been held to remember the floods in Cumbria and Pc Bill Barker who died when a bridge collapsed.

Pc Barker was directing traffic away from Northside Bridge, in Workington, when it collapsed early on 20 November, 2009, and he was swept away.

His widow Hazel Barker and her children have organised the memorial tribute.

The region suffered unprecedented rainfall last November during many homes and businesses were destroyed.

The vigil was held in the Tesco car park next to the River Derwent in Workington and was being followed by a fundraising event.

Money raised from the charity event will be split between the Great North Air Ambulance, which was Mr Barker’s preferred charity, and the Care of Police Survivors (COPS) which support families of officers killed while on duty.