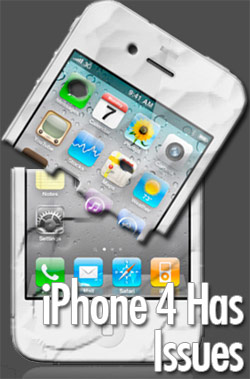 You may have heard of the critical issues facing a number of iPhone 4s as early as launch day. Most notably, many iPhone 4 owners report a diminished cellular signal when holding the phone by its left bezel (where the antenna is located), others report shattered phones (not just displays), and some people have even had seemingly-permanent yellow spots on their iPhone 4 displays.

Should You Be Worried?

Let me say right off the bat that the iPhone has always had issues, and some of its problems are unresolvable. The iPhone is a stunning piece of hardware, but even Apple engineers can’t create a perfect product. My previous iPhones have suffered from a faulty dock connector, an echoing earpiece, shattered glass, a stained bezel and lately a weakened home button on my 3GS. It is inevitable that iPhone 4 will have its issues, too, especially over time.

Luckily, most of the time I had a problem (with the exception of the shattered glass incident), I got a replacement iPhone from the Apple Store for free. If your iPhone 4 has a serious issue, you will likely have no problem getting a replacement from Apple, as long as the incident is within the terms and timeframe of the warranty. Yes, you may be inconvenienced if you buy a faulty iPhone 4, but in most cases Apple will probably accommodate you and replace your phone without a problem. My experience with the Apple Store Geniuses has overall been positive.

Still, it is worth evaluating the claims made about faulty iPhone 4s, so that you can decide whether or not to take the plunge and buy the new iPhone just yet.

Here is my evaluation of the three main iPhone 4 issues, according to my research and best judgment. Note: As of this writing, I have yet to get my own iPhone 4. 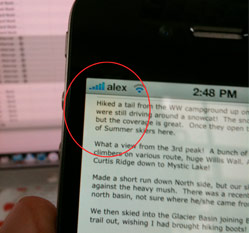 Some of the alleged problems may actually be non-issues. Consider the Apple support tech who said the yellowing on some screens is “residue from manufacturing” that will disappear in a short time.

Then again, other support technicians told customers to replace their yellowed phones at the Apple Store. We will have to see if these yellow marks disappear over time.

The antenna in the bezel seems like a more serious problem. Many iPhone 4 owners report that covering the bottom left side of the iPhone with your palm or fingers causes you to lose reception and transmission.

Ironically, Apple placed the antenna in the iPhone 4 bezel in an attempt to improve cellular signal, but the placement is affecting the signal when the bezel comes into contact with your hands. However, when you put a case (or an Apple Bumper) on the iPhone 4, the signal issue goes away.

Could this antenna issue trigger a recall of iPhone 4′s? In my opinion, it is doubtful that Apple will admit to the problem, but if they do, I imagine they will simply tell you to put a case on your phone. We’ll see.

Update: Steve Jobs’ response to an inquiry on the issue: “Just avoid holding it in that way.” Or use a case.

iPhone has a history of cracking, and it seems the problem could be worse this time around, since the entire body is now made of glass.

One iPhone 4 owner, Jared Franklin, shattered the rear glass on his new iPhone after dropping it on the same day he received it. Ouch! 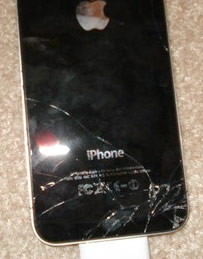 I shattered the glass display of my iPhone once, and it cost me $250 at the Apple Store to replace it. Now I have to worry about the back of my iPhone 4 as well as the front!?

Judging by the amount of comments from my readers on that post who also cracked their iPhone screens, it looks like Apple is going to make even more of a killing off of the poor iPhone 4 users who drop their devices.

Don’t expect much to be done about this issue. Apple never has, and probably never will, admit that they are creating easily crackable iPhones. They will simply blame your “negligence” and make you cough up a couple hundred more dollars.

Clearly, the question of the iPhone 4′s reliability is a bit hazy right now. There have been early reports of potentially serious issues, but only time will tell whether these problems will plague a significant number of iPhone 4s.

For this reason, if you haven’t yet bought an iPhone 4, I would urge you to consider waiting 2 or 3 weeks to see how all this pans out.

Who knows? Maybe given enough complaints, Apple will acknowledge the antenna issue and correct future shipments. And maybe the yellow hue will disappear and the iPhone 4 screens will be undamaged afterall. But… don’t expect much to be done about the glass — cracked iPhone screens are a common occurrence, and Apple rarely shows mercy when it comes to replacing iPhones that have cracked.

As for me, I am not going to lie and say that I am waiting for the problems to go away before I buy the new iPhone. I actually called all around town today and learned that the iPhone 4 is sold out everywhere. I decided not to pre-order when I read claims that Apple would ship pre-ordered iPhone 4s a week late, but now I am without the new iPhone while preorders actually arrived a day early for many people.

Despite the issues, the iPhone 4 is a remarkable piece of hardware. If you haven’t gotten a chance to drool over it yet, go check out TiPB’s iPhone 4 gallery.

What is Your Experience?

Have you gotten an iPhone 4 yet or will you wait to see if the issues are resolved? Whether you have or have NOT had problems with your new iPhone 4, I would love to hear about your experience in the comments.

How Serious Are the Reported iPhone 4 Issues? is a post from Apple iPhone Review.