Here’s a quick tip for a really obscure but quite helpful feature in Logic if your collaborating with someone on a project based in Logic.

I totally stumbled on this the other day with a client who bought in some stems for a programming job. Unfortunately I found this after we’d finished!

The jist of this is that if somebody sends you just a raw .WAV or.aif file that’s been ‘Bounced’ in Logic you can extract some very useful information about the project it came from!

Step 1: Somebody Sends You An Audio File!

I get this all the time! Somebody sends or brings in a rough mix of a track to add some guitar or programming to, I either have to work out the tempo by hand or phone them to get it. To make matters worst it might have a load of tempo changes in it!

I can’t tell you the amount of times this has happened. Lining up bars with peaks in the audio file only to find it goes out half way through. This isn’t such a problem with live instrument takes as you can turn the click off and just play to the track, but for programming!!! Nightmare!

Now as most of my clients use Logic anyway I think this might be a thing of the past thanks to a nifty little feature that must have crept in to Logic without me knowing!

Step 2: Get The Project Tempo Information

Import the .WAV or .AIF file into a new project. You can do this any way you like. In this case I’ve got a drum track about 40 seconds long. Now I don’t know any thing about this file. What’s the BPM? Does it have any tempo changes? What key is it in??? (Just kidding!)

Logic defaults to 120bpm like most other programs. Listening to these drums against the click it becomes apparent very quickly it’s not at 120bpm!

If this track was bounced in Logic as a .WAV or .AIF (which it was) I can simply select the audio file and choose Options -> Tempo -> Import Tempo Information From Audio File.

Bingo! Now you can see in the Tempo list all the information Logic embedded in the Bounce. As you can see there’s a lot of subtle hidden changes and a rall (rallentando) at the end. Try working that one out! 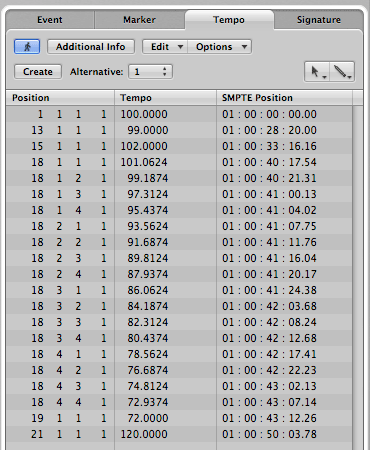 Now when I play back the track it’s bang on!

You can do the same for any embedded markers. This time select the audio file and choose Options -> Marker -> Import Marker From Audio File.

And there you have it! Done!

As of yet there is no way to import time signatures via the audio file, which is a shame. This would be incredibly useful, even more so than markers.

I’m sometimes presented with film cue stems that are laden with signature changes. I often get the Logic arrangement too, so thankfully now I can Import them via the ‘Selective Track Import’ function. Just choose File -> Import, select the Logic file you wish to import from and using the Browser choose ‘Global’. 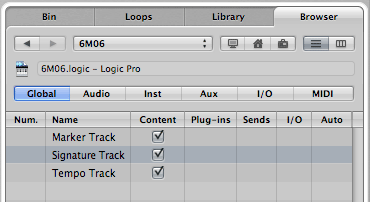 Selective Track Import, it’s really handy if you have the project file!

Before this was available it was a case of either copy and paste everything from one Arrange to another. Signature, Tempo, Markers, audio and MIDI. Or rebuild or Replace the environment of the Logic song. Why? Well everyone sets up Logic differently. Working with an unfamiliar Default layout or environment can waste a lot of time working out Ports, Outputs, ergonomics etc. Either way was a hassle!

For instance my setup use ‘Outputs 3-4′ as the main outs (Don’t ask! It’s a MOTU thing!!). The first thing I have to do it’s set all outs to ‘Stereo Out’ if it’s somebody else’s project file. Boring! Plus I just really like working in my default setup because I know exactly where everything is! OCD maybe!

If all you have is a rough mix/idea as an audio file to work with your going to be in for a bit of setup time! Being able to extract ‘the lot’ (signature, tempo, marker) from that file would be a true timesaver!! It would make collaborating in Logic super easy. Think of the size difference between an entire Logic project and a WAV file!

It’s worth noting you can export this data out to an audio file too without bouncing. Have a look at the file menus above. Next time your collaborating or adding tracks to a song made in Logic this might come in handy. You just never know!