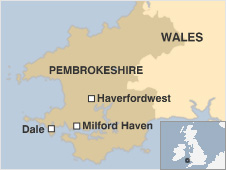 The gathering is near Dale, on the Pembrokeshire coast

Around 2,500 people are at an illegal gathering in the Dale area of Pembrokeshire, say police.

Officers are at the scene near Dale Castle and Dyfed-Powys Police have advised people not to travel to the area.

A force spokesman said they were “closely monitoring the situation..to ensure minimum disruption to the surrounding communities”.

Police confirmed loud music was being played at the site near the coast.

Anyone with information or concerns is asked to call police on 101.

There are some homes nearby.

The force spokesman said: “We advise that anyone who is considering travelling to the area not to do so as access will be prevented.”

He added that they also wanted to ensure the safety of those attending the gathering itself.

illegal gathering in the dale of pembrokeshire what is it about