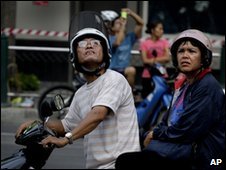 Thai authorities say the situation in Bangkok has returned to normal

Thai authorities have lifted a curfew in Bangkok and 23 provinces, 10 days after city-wide arson attacks that followed an army operation to clear anti-government protesters.

Prime Minister Abhisit Vejjajiva said the situation was under control and there was no need to extend the curfew.

But he said that a state of emergency imposed during the months-long protest would remain.

More than 80 people died during the stand-off, which began on 14 March.

Attempts to negotiate a political solution failed and on 19 May, following six days of violent clashes, troops moved into the barricaded camp to end the protest.

As troops moved in a hard-line group of protesters rioted, setting shops, banks and other buildings on fire. One of Bangkok's largest shopping centres, Central World Plaza, was among the buildings destroyed.

An overnight curfew has been in place since then in the Thai capital and 23 provinces home to many who sympathise with the protesters.

But Mr Abhisit said that it would be cancelled.

"We will not have to extend it. The situation is under control now," he told journalists.