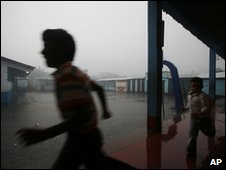 Guatemalans who are still clearing away debris from a volcanic eruption are braced for a major storm.

Tropical Storm Agatha, forming on the Pacific coast, is expected to dump up to 50cm (20in) of rain, increasing the danger from landslides and floods.

Hundreds of people are in shelters after the Pacaya volcano erupted on Thursday.

A state of emergency in place because of the eruption, and communities in the storm's path are being evacuated.

Agatha, the first named storm of the season, is expected to hit land on Sunday, but emergency workers have already reported rivers being swollen by heavy rains. 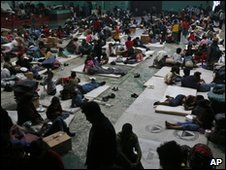 Hundreds of people are already in shelters because of the volcano

Officials are warning that flooding could be worse than usual because ash from the erupting Pacaya volcano has blocked drainage systems.

The storm is also expected to lash neighbouring El Salvador and southern Mexico.

Forecasters from the US National Hurricaine Center warned that Agatha was packing winds of 40mph (64km/h).

"This system is expected to produce total rain accumulations of 10 to 20 inches over extreme south-eastern Mexico, Guatemala and much of El Salvador," said the centre.

"These rains could cause life-threatening flash-floods and mudslides."