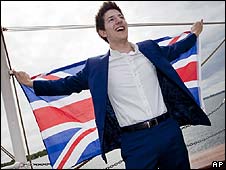 Dubovie was chosen to represent the UK in March

Acts from 25 countries are preparing to take part in the grand final of this year's Eurovision Song Contest, taking place later in Norway's capital Oslo.

British hopes rest on 19-year-old Josh Dubovie, who will perform a Mike Stock and Pete Waterman song called That Sounds Good To Me.

The UK has not won Eurovision since 1997, when Katrina and the Waves triumphed with Love Shine a Light.

Bookmakers have made Azerbaijan favourite to win the contest.

Their chosen act, Safura, will open Saturday's show with her song Drip Drop.

Because the phone vote that decides the winner opens at the beginning of the show, it is thought the 17-year-old may have an advantage over her fellow contestants.

The economic downturn has hit this year hard, though, with several countries having to pull out of the event because they could not afford to take part.

Graham Norton will host the BBC's live TV coverage of the event, which kicks off at 2000 BST on BBC One. 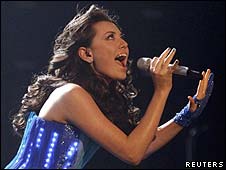 Bookmakers have made Safura from Azerbaijan favourite to win

Speaking to the BBC earlier this week, Waterman admitted it was "highly unlikely" the UK will win this year's competition.

However, he added, "there is always an outside chance that something bizarre might happen."

Dubovie was chosen to represent the UK after securing the most public votes on Your Country Needs You! on BBC One in March.

Bookmakers Ladbrokes have given him odds of 175/1 – the lowest given to any UK Eurovision hopeful ever.

The UK is one of five automatic finalists, alongside France, Germany, Spain and last year's winners Norway.

The remaining 20 finalists have been whittled down from the 34 countries that participated in the two semi-finals that took place on Tuesday and Thursday.

Among them is Niamh Kavanagh, who is representing the Republic of Ireland for the second time after winning the competition in 1993.