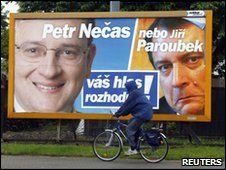 No political party is expected to win an overall majority

Two days of voting are about to begin in a general election in the Czech Republic, in what is predicted to be a tight race.

The poll will bring to an end the rule of a caretaker cabinet that has been in place for the past year.

The left-wing Social Democrats lead the opinion polls, but it is thought they will fall short of a majority.

But with no party expected to win an overall majority, the political stability needed to tackle the issues effectively could prove elusive, says the BBC's Rob Cameron in Prague.

The country has had an interim administration since the centre-right government was toppled halfway through the country's European Union presidency in March 2009.

Opinion polls put support for the Social Democrats at 30%, while the right-wing Civic Democrats (ODS) are on about 20%.

The Communists are predicted to take third place.

The three parties are the front-runners in a crowded field: 25 parties fielding some 5,000 candidates are competing for 200 seats in the lower house of Czech parliament.

The Czech Republic has managed to sail through the worst of the economic crisis, thanks to relatively low levels of debt and continued growth, our correspondent says.

But he adds that analysts say big problems such as an unsustainable pension system are being ignored.