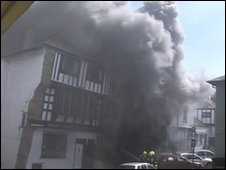 The fire raged through the properties’ wooden Tudor beams

A fire which swept through the Devon resort of Dartmouth has destroyed parts of its historic Tudor centre.

The fire started in a fish and chip shop at lunchtime on Friday and quickly spread to adjoining properties in Fairfax Place.

At its height about 80 firefighters from across Devon fought to control the blaze.

Eight shops and 15 flats were destroyed in the fire, but no-one was injured. The cause is being investigated.

Mayor of Dartmouth, Richard Rendle, told BBC News it was a "human tragedy and a historic one".

Mr Rendle said many of the people who lost their homes were taken in by residents on Friday night.

"Its rather rewarding to see how this town has rallied round," he said.

"I know people who have previously never met, have opened their homes."

John Walker, a cameramen, who lives in the town described the fire as a "total disaster".

A large part of the town remains cordoned off for safety reasons.