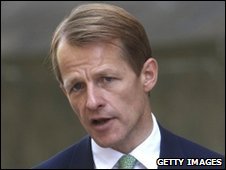 David Laws should stand aside as Chief Treasury Secretary after he claimed expenses to pay rent to his partner, says the former Commissioner for Standards in Public Life.

Sir Alistair Graham said Mr Laws should step aside while an investigation is carried out.

Mr Laws said he will pay back the money which the Daily Telegraph said totalled Ã‚£40,000.

He said he wanted to keep the relationship with the man private.

David Cameron said he agreed with Mr Laws's decision to refer himself to the Parliamentary Standards Commissioner.

Since 2006 parliamentary rules have banned MPs from "leasing accommodation from a partner".

The Liberal Democrat cabinet minister claimed up to Ã‚£950 a month for eight years to rent a room in two properties owned by his partner, James Lundie, according to the Daily Telegraph.

Mr Laws said he claimed back the costs of sharing a home in Kennington, south London, with Mr Lundie from 2001 to June 2007.

The Yeovil MP said his partner bought a new home, in London, in June 2007 and he continued to claim back his share of the costs until August 2009.

The minister said he extended the mortgage on his Somerset property to help Mr Lundie purchase the new property.

Sir Alistair, former chairman of the Committee on Standards in Public Life, said it was a shame to see expenses back in the news.

"I think all of us hoped that after the General Election, a line could be drawn – we've got a new independent Parliamentary standards authority – that we would be in a new era of transparency and cleanliness as far as our politics are concerned. Now there's a bit of a question mark."

He added the revelations made Mr Laws's position very difficult.

"At a minimum he should step aside while the Parliamentary Commissioner for Standards carries out his investigation and reports to the Committee on Standards and Privileges."

He said: "At no point did I consider myself to be in breach of the rules which in 2009 defined partner as 'one of a coupleÃ¢€¦ who although not married to each other or civil partners are living together and treat each other as spouses'.

David Laws is well liked and highly regarded at Westminster.

Many Tories view him as their favourite Lib Dem – a deficit hawk; the ideal man to get to grips with government waste.

But politics is a brutal business. And so far Downing Street have been careful not to give him its unequivocal support.

The critical calculation those inside Number 10 will be weighing up is whether the damage to Mr Laws's credibility and standing is such that he no longer has the authority to force through difficult spending cuts.

If so, then he is unlikely to survive.

In Mr Laws's favour though is the fact Number 10 will be deeply reluctant to lose such a pivotal member of the coalition.

There may also be a desire not to be rocked by the media so early on in the life of this coalition government and a temptation to try and tough this out.

"Although we were living together we did not treat each other as spouses – for example we do not share bank accounts and indeed have separate social lives.

"However, I now accept that this was open to interpretation and will immediately pay back the costs of the rent and other housing costs I claimed from the time the rules changed until August 2009."

He added: "My motivation throughout has not been to maximise profit but to simply protect our privacy and my wish not to reveal my sexuality.

"I regret this situation deeply, accept that I should not have claimed my expenses in this way and apologise fully."

A spokesman for Prime Minister David Cameron said: "The prime minister has been made aware of this situation and he agrees with David Laws's decision to self-refer to the Parliamentary Standards Commissioner."

Labour MP Alan Whitehead, a member of the standards and privileges committee in the old parliament, said Mr Laws's position would become "very difficult" if it was decided that serious breaches of the rules had been made.

But former Lib Dem leader, Lord Ashdown, said the revelations were a "personal tragedy" for Mr Laws, describing him as "Mr Integrity".

Mr Laws's parliamentary colleague, the Liberal Democrat MP for Taunton Deane Jeremy Browne, said the matter was "a human story, not a financial story" about a "deeply private man".

"This is not about David being motivated by money," he said.

Housing allowance must not be used to meet the costs of renting a property from:

yourself;a partner or family member (including a spouse or civil partner);a close business associate; or an organisation or company in which you or a family member have an interest (other than as an ordinary investor).

Mr Laws was one of five Liberal Democrats named in Mr Cameron's coalition cabinet following the election, working with Chancellor George Osborne at the Treasury.

A press release on Mr Laws's website, dated 18 June last year, said he had not "gained" through the taxpayer from buying a property because he rented accommodation in London.

The release said: "Recent publicity means that there is particular interest in which homes MPs have designated as their second homes, how much they have spent on these, and what items have been purchased.

"I have rented a property in London, rather than buying one, so I have made no gain from buying a property with help from the taxpayer."

In an interview with the Times newspaper, carried out on Thursday, Mr Laws had said he was single.

But, speaking to the newspaper after details of his relationship emerged, he said: "When I grew up, being gay was not accepted by most people, including many of my friends.

"So I have kept this secret from everyone I know for every day of my life. That has not been easy, and in some ways it is a relief not to have to go on misleading those close to me about who I am."