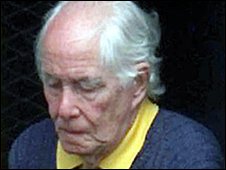 Biggs was released from prison on medical grounds

Great Train Robber Ronnie Biggs has been admitted to hospital in London after complaining of chest pain.

"He had pain in his chest this morning, he's conscious but he's in a lot of pain," he said.

Biggs was released from prison on compassionate grounds in 2009 because of health problems. He has been living in a care home in Barnet.