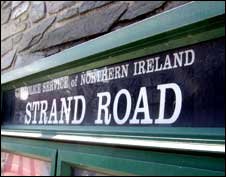 A device has exploded outside a police station on Strand Road in Londonderry. The small explosion happened at about 0015 on Saturday morning.

Army bomb experts are examining a car in nearby Queen Street which was reported to have been on fire shortly after the explosion was heard.

A nearby home for elderly residents had to be evacuated, with people taken to Brooke park leisure centre.

SDLP councillor Helen Quigley said the area was cordoned off.

"It is my understanding that there was on explosion last night and Strand Road won't be open for some time while the police look into this."

On Friday night another suspicious object found in a bar in Londonderry was a viable pipe bomb, police have said.

The alarm was raised after the object was found upstairs in a bar at Stanley's Walk, in the Brandywell area.

The army was called and the alert has ended. In a separate alert, five homes in Derry were evacuated over night.

A suspicious device, left at the roadside at O'Connor Court in Ballymagroarty, turned out to be a hoax.

Two controlled explosions were carried out during the Ballymagroarty alert shortly after 0500 BST on Friday.