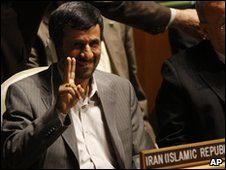 The 189-member nations of the Nuclear Non-Proliferation Treaty (NPT) are struggling to reach a deal in the last hours of lengthy talks on a new text.

The proposed document includes a hotly debated proposal to ban nuclear weapons in the Middle East.

The 28-page Final Declaration is due to be brought up for consensus approval at the United Nations later.

If they do not reach agreement, the member nations may have to wait another five years to move forward.

The draft declaration calls for the United Nations secretary general to organise a meeting of Middle East states in 2012 to sign on to the creation of a zone free of nuclear weapons or other weapons of mass destruction.

Conference president Libran Cabactulan, of the Philippines, told a plenary session that the document was "the best that can be offered".

Small groups at the UN debated the proposed declaration late into the night on Thursday, as the month-long UN nuclear conference entered its final hours.

One of the sticking points involves Israel, a non-member of the NPT, which is widely believed to have nuclear weapons although it has never admitted to possessing them.

Arab states and Israel's allies have been at loggerheads over wording for the proposed nuclear-weapons-free zone.

Israel has said it backs a nuclear-weapons-free zone in principle, but only after peace agreements with all the countries in the region.

As the conference moved into the last stretch, Iran demanded that the official five nuclear-armed nations – the US, Russia, UK, France and China – agree to a timetable for negotiating a treaty to abolish their arsenals.

"The five nuclear-weapon states cannot easily and totally ignore this legitimate request. If so, then the conference will not be successful," said chief Iranian delegate Ali Asghar Soltanieh.

Under the treaty, the five official nuclear-armed nations are committed to moving towards their elimination.

Iran has faced repeated questions over its own nuclear programme, which the West believes is aimed at making weapons. Iran insists it is solely designed to meet its energy needs.

The NPT has encountered difficulty in coming up with the best method for monitoring suspect nuclear programmes in Iran and North Korea.

The four nations suspected of having nuclear weapons that are not signatories to the treaty – India, Pakistan, North Korea and Israel – are not covered by any NPT agreement reached.

The NPT conference, which meets every five years, risks losing credibility if no progress is made.

The last review conference, in 2005, failed to adopt a consensus declaration.