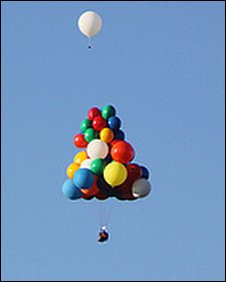 A US adventurer has completed his attempt to cross the English Channel using dozens of helium-filled balloons.

Jonathan Trappe set off from a field near Ashford, Kent just after 0500 BST strapped to a chair and suspended by clusters of giant inflatables.

The 36-year-old daredevil became the first cluster-balloonist to cross the Channel when he landed in a French cabbage field at about 0900 BST.

He said flying over the white cliffs of Dover was "tremendously beautiful".

Mr Trappe's daring crossing was reminiscent of a journey taken by grumpy pensioner Carl Fredricksen in the recent animated film Up.

After setting off from Kent Gliding Club in Challock, Mr Trappe sailed across the coast and over the Channel.

When he reached the French countryside he started cutting away the balloons to aid his descent.

Just after 0900 BST he avoided a power line and bounced to a halt in a cabbage field.

"Didn't you have this dream – grabbing on to a bunch of toy balloons and floating off? I think it's something that's shared across cultures and across borders.

"Just this wonderful fantasy of grabbing on to toy balloons and floating into open space."

He added: "There are risks and we work to methodically reduce the risk so we can have a safe and fun flight.

"Because really it's only about dreams and enjoying an adventure and that's only enjoyable when it is safe."

In April he flew 109 miles across North Carolina to claim a new world record for the longest free-floating balloon flight.

A French Police spokesmen said they were surprised to see Mr Trappe but he had the correct documents and was not arrested.

The spokesman added: "He had all the correct authorisation and I believe he even gave something to the owner of the land where he came down by way of damages."