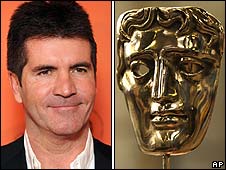 Music mogul Simon Cowell is to receive a special prize at the Bafta TV awards next month, organisers have announced.

The X Factor judge is being honoured for his "outstanding contribution… and for his development of new talent".

John Willis, chair of Bafta's TV committee, said he was "delighted" to recognise "one of the most brilliant entertainment producers of our time".

Earlier this year Cowell announced he was leaving American Idol to launch The X Factor in the US.

This year's Bafta TV awards will be held at the London Palladium on 6 June and will be broadcast on BBC One.

Renowned for his acerbic putdowns and 'Mr Nasty' persona, Cowell has become one of the most powerful and influential – not to mention divisive – figures in the TV industry.

Later this year the 50-year-old will be honoured with an International Emmy award in recognition of his television work.