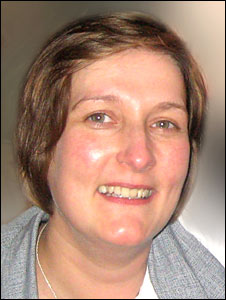 A murder inquiry was launched after Suzanne Pilley disappeared

Police hunting the killer of missing Edinburgh woman Suzanne Pilley are continuing to follow new leads in the area they think her body was hidden.

Ms Pilley, 38, disappeared on 4 May and officers believe she was murdered and her body dumped in Argyll.

It comes as new links emerged between her former boyfriend and the area where police are focussing efforts.

Officers are focussing their efforts on a large area of Argyll, and are investigating claims Mr Gilroy was there about the time she went missing.

Newspaper reports have suggested Mr Gilroy, who works for the Edinburgh-based firm Infrastructure Managers Limited, was at a school in Lochgilphead on 5 May, the day after Ms Pilley went missing.

The company has a contract to manage the maintenance of the campus and Mr Gilroy was a regular visitor to the school.

The reports suggest he turned up unannounced that day, spent some time in the building and picked up some bin bags from a cleaner.

He is said to have left the building shortly after that. It is claimed he told colleagues that he had a meeting in Lochgilphead but did not inform the school.

Lothian and Borders Police are not denying or confirming any of the information.

On Friday 21 May Mr Gilroy spent six hours helping police with their inquiries on a voluntary basis.

Ms Pilley, 38, from the Stenhouse area of Edinburgh, disappeared on 4 May.

Police found CCTV footage of her outside her office in Thistle Street, Edinburgh, on the morning she disappeared.

Officers believe she was killed on the day she disappeared and her body dumped in countryside in the west of Scotland.

Four officers from Lothian and Borders Police have based themselves at Lochgilphead Police Station in Argyll.

Police said they now had more than 100 separate items of information from the public after several appeals.