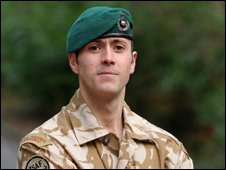 A UK marine killed in a bomb blast in southern Afghanistan has been named by the Ministry of Defence.

Cpl Stephen Curley from 40 Commando Royal Marines, serving as part of Combined Force Sangin, was killed in Afghanistan on Wednesday.

The 26-year-old from Dewsbury, West Yorkshire, was killed while on foot patrol. He was married to Kirianne and had a five-month old son.

Mrs Curley said it was "impossible" to say how much he meant to her.

She said: "It is impossible for me to express what my husband meant to me, Daddy to our 18-week-old son William and my partner in crime, Stevie was my purpose, what makes me tick.

"A man of few but powerful words when it mattered, he lived by the motto ‘If you’re not living life on the edge, you’re taking up too much room’. This will be forever imprinted on our hearts.

"Steve stood firmly for what he believed in – a man who lived by his convictions and fought vehemently for what he thought was right.

"Steve loved his family, and would be so proud of his mother and brother. We will carry your heart with us always. Engraved in my wedding ring the words, Kirianne, my one, my love, my wife. Stephen, sleep well my love."

Lt Col James said: "[He was] bright, fit, charismatic and supremely brave, he was a man who genuinely inspired others. Based with me, I saw in him a selfless, loyal, utterly dedicated and natural leader of men.

"He died on patrol in Sangin leading the men he loved, and alongside the men who loved him."