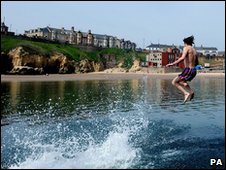 Water quality was tested at 769 beaches in the UK

It blamed heavy rainfall during the past three summers for overloading sewage systems and washing fertiliser and pollutants onto beaches.

It also warned that several popular beaches would fail EU rules from 2015.

The annual Good Beach Guide is published on Friday and lists results of water quality tests conducted from May to September 2009.

The latest guide recorded fewer failures than last year – 41 as opposed to 66.

Water quality had steadily improved from 2001 to a peak in 2006, but has declined ever since, the marine society said.

The society said this caused overloaded sewer systems to discharge raw sewage on to some beaches, and pollutants such as animal waste, fertilisers and refuse to be washed from farm land and city streets into rivers and the sea.

"The regional pattern to this rainfall means that some regions such as north west England and Scotland fared worse in this year's guide whereas others like the Channel Isles did markedly better," a spokeswoman said.

It warned that stricter EU regulations, due to come into force in 2015, willsee 83 beaches fail even the minimum water quality standard unless improvements are carried out.

Sewer overflow pipes, which transport raw sewage into rivers and the sea, were a cause of concern, said the society's coastal pollution officer, Thomas Bell.

"MCS knows of at least 500 UK beaches with one or more of these pipes.

"There are many places where they don't cause a problem but 45% of tested beaches aren't recommended by MCS because of pollution.

"That percentage is set to increase because of tougher bathing water standards from 2015, and we think [overflow pipes] are partly to blame," Mr Bell said.