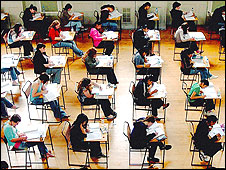 A new A* grade being awarded in A-levels this year will go to 7% of entries, research suggests.

Students taking maths or languages are the most likely to score top marks.

Almost one in four pupils taking further maths are likely to get an A*, while about one in 10 English literature students will, according to research from exams regulator Ofqual.

The higher grade was brought in to help universities differentiate between the brightest students.

But some universities are not going to take the A* grades into account until they are better established.

Last year, one in four A-level entries in England, Wales and Northern Ireland was awarded an A grade.

For its study, Ofqual, examined the results of last year's A-levels against the grading system devised for the new arrangements.

It looked at how many of last year's students who scored As would have been given an A* under the new system.

The greatest number of A* grades has been predicted for math students.

In another popular subject – English literature – 9% of students would have got an A*.

The likelihood of getting an A* is even higher in other languages, including Arabic (13%), Bengali (10%) Japanese (45%) and Persian (29%), although these are taken by far fewer students.

Many of these students already speak the language at home, it is thought.

In Latin, taken by 1,400 students, almost one in four would have earned an A*.

This is a period of significant change to A-levels

Kathleen Tattersall, chair of Ofqual, the regulator for England and Wales, said differences in top grades awarded in different subjects were to be expected.

"It does not mean that some subjects are easier or harder than others; rather it highlights differences in the cohorts taking those subjects," she said.

She added: "This is a period of significant change to A-levels.

"Ofqual and its fellow regulators have been working for four years with the awarding bodies to make sure that the grades awarded this summer, including the new A* grade, are consistent and fair.

"During the summer we will be monitoring the awarding process and the results in order to ensure that the grades candidates achieve are fair to them and are in line with those awarded in previous years."

To get the top grade, students will have to perform well across all their papers,getting at least an A grade, but also score highly on their A2 exams, usually taken in the second year of study.

These are the exams which have been made harder to stretch the brightest students.