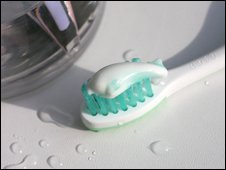 People who fail to brush their teeth twice a day are putting themselves at risk of heart disease, say researchers.

A Scottish study of more than 11,000 adults found those with poor oral hygiene had a 70% increased risk of heart disease compared with those who brushed twice a day.

But a charity said oral health was just one factor in good heart health.

It is known that inflammation in the body, including in the mouth and gums, has an important role in the build up of clogged arteries, which can lead to a heart attack.

But this is the first time that researchers have looked at whether the frequency of teeth brushing has any bearing on the risk of developing heart disease.

If you don’t brush your teeth, your mouth can become infected with bacteria which can cause inflammation

Data was collected on lifestyle behaviours, such as smoking, physical activity and oral health routines.

Overall, six out of 10 people said they visited the dentist every six months and seven out 10 reported brushing their teeth twice a day.

Over the eight-year study there were 555 "cardiovascular events" such as heart attacks, 170 of which were fatal.

Taking into account factors that affect heart disease risk, such as social class, obesity, smoking and family history, the researchers found those who brushed twice a day were at a lower risk.

Those with poor oral hygiene also tested positive in blood samples for proteins which are suggestive of inflammation.

Study leader Professor Richard Watt, from University College London, said future studies will be needed to confirm whether the link between oral health behaviour and cardiovascular disease "is in fact causal or merely a risk marker".

Judy O'Sullivan, senior cardiac nurse at British Heart Foundation, said: "If you don't brush your teeth, your mouth can become infected with bacteria which can cause inflammation.

"However, it is complicated by the fact that poor oral hygiene is often associated with other well known risk factors for heart disease, such as smoking and poor diet."

She added: "Good personal hygiene is a basic element of a healthy lifestyle.

"But if you want to help your heart, you should eat a balanced diet, avoid smoking and take part in regular physical activity."

Professor Damien Walmsley, scientific adviser to the British Dental Association, added it was still unclear whether there was a definite cause and effect between oral hygiene and heart disease.

"Whatever the true position is, we can say with certainty that if people brush teeth twice a day with fluoride toothpaste, visit the dentist regularly and restrict sugary snacks to mealtimes; that this will go a long way towards keeping the teeth and gums in a healthy state for life."