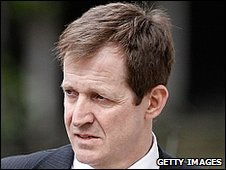 No 10 complained about the presence of Mr Campbell on the discussion show, the the corporation said.

No 10 had said he was not elected nor a frontbench spokesman and asked him to be replaced by a shadow minister.

The BBC said it refused the demand as a point of "fundamental principle".

No representatives from the coalition government appeared on the show, which was recorded earlier in the evening.

Introducing the programme, Mr Dimbleby said he would have "expected" to have had a government minister on the panel in the week that it unveiled its legislative agenda for the year ahead in the Queen’s Speech.

He explained that No 10 had made it clear that a Cabinet minister was "available" to appear but only if Mr Campbell was replaced by a member of the shadow cabinet.

He said it was up to "us on Question Time to decide who should be on the programme not Downing Street".

Gavin Allen, the show’s executive editor, said it was the "first time" in his three years in the job that No 10 had made such a demand.

Explaining why it had been "obviously refused", he said: "It is a fundamental principle of our independence that politicians cannot dictate who sits on the panel.

"It is for Question Time, not political parties, to make judgements about impartiality and to determine who is invited to appear in the interests of the audience.

"Parties are free to accept or reject those invitations but they do not have a right of veto over other panellists. Licence fee payers rightly insist that the BBC must be free from political interference."

Mr Allen said Mr Campbell was one of the most "senior and influential" figures in the Labour movement.

He added that when in government, Labour ministers had regularly appeared on Question Time when the opposition was represented either by a backbench MP or by an unelected panellist.

"It is not an argument or an objection that bears scrutiny," he added

Mr Campbell was a key adviser to Tony Blair in opposition and was No 10 director of communications and strategy between 1997 and 2003 – when he stepped down from the role.

He recently returned to the limelight advising Labour on its general election strategy and was among those coaching Gordon Brown ahead of the leadership debates.

He was one of a close circle of advisers in Downing Street in the final hours of Mr Brown’s premiership as the party tried and failed to negotiate a coalition deal with the Liberal Democrats.