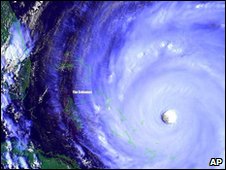 Hurricanes are common in the Gulf of Mexico

Hurricanes could complicate the clean-up of the oil spill in the Gulf of Mexico and damage other offshore pipelines, US scientists warn.

With the hurricane season looming, a study says storm-induced underwater currents may spark mudslides on the seafloor.

This could break oil pipes, but the leaks could be small and difficult to detect, they say.

The study will be released on 10 June by the American Geophysical Union (AGU).

The researchers further warn that the damage could have irreversible impacts on the environment.

Hurricane studies are nothing new – scientists have long known that storms can create waves some 20m high.

Damage to oil pipelines has also been noticed in the past, but the recent research was able to measure the huge forces hurricanes exert at great depths (bottom stress).

William J Teague, one of the authors and a scientist at the US Naval Research Laboratory at Stennis Space Center in Mississippi, told BBC News: "This has been the first time that hurricane-induced bottom stress has been evaluated with simultaneous measurements of water waves and currents – and the stress on average was about 15% to 20% of the wind stress on the surface and as high as 40% under the peak of the hurricane."

The researchers found that the induced bottom stress was still critical at depths of up to 90m.

"And the most surprising thing was that the period in which this bottom stress could be damaging persisted for about a week after the hurricane passed," said Mr Teague.

Mudslides in the ocean

The scientists based their study on the observations of the powerful category 4 Hurricane Ivan that raked the Gulf of Mexico in 2004.

Hurricanes could potentially cause difficulties to the ongoing clean-up procedures in the Gulf of Mexico, where a BP-operated Deepwater Horizon oil rig exploded and sank in early April.

This triggered a spill that has so far spewed tens of thousands of barrels of oil into the ocean.

The scientists say a hurricane could disperse the oil much further into the Atlantic.

They installed six large sensors on the seafloor to record changes induced by hurricanes in underwater currents. The oceanographers found that currents became so strong that they triggered mudslides – powerful enough to break pipelines or other underwater equipment.

The researchers then used a computer model of wave-induced current stresses to find out just how powerful hurricanes would need to be for the currents to tear up the seabed.

They discovered that even storms much weaker than the devastating Ivan could potentially disrupt the ocean floor.

This is not good news for the Gulf of Mexico, whose seabed is criss-crossed with some 50,000km of pipelines. The region provides almost a third of the US oil supply and about a quarter of its natural gas, but it is prone to hurricanes – especially early in the season, which officially begins on 1 June.