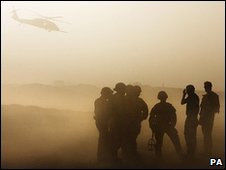 A soldier shot dead during a firefight in Afghanistan has been named as Gunner Zak Cusack, of the 4th Regiment Royal Artillery.

The Ministry of Defence said the 20-year-old soldier was from Stoke-on-Trent.

He was shot on Wednesday during a joint foot patrol with Afghan National Army personnel near Nahr-e Saraj, Helmand.

The total number of UK service personnel killed in Afghanistan since 2001 has reached 288.

It was his second tour of duty in Afghanistan, having first been deployed on his 18th birthday in 2007.

In a statement released by the ministry, his family said: "Zak was a courageous, compassionate and charismatic young man. We are justly proud of not only the job that he did, but of the complete person we all knew and loved."

Expressing condolences to the family, Defence Secretary Liam Fox said: "It is clear that he was hugely valued by his friends and comrades as a professional and selfless soldier, and they all speak highly of his wit and strong spirit."

He said he had been killed while providing security to the local population following "recent attempts by the Taliban to intimidate them".