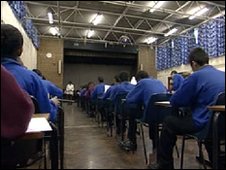 The QCDA was responsible for developing the curriculum and tests

Education Secretary Michael Gove has confirmed that he is closing down the qualifications and curriculum agency, the QCDA.

Mr Gove has written to the chairman of the quango to say he will bring forward legislation in the autumn to scrap it.

The agency's work on national tests and exam administration would continue until it could be transferred, he said.

But its qualifications and curriculum work would stop, resulting in an Ã‚£8m budget cut.

The Qualifications and Curriculum Development Agency had been created by the previous government to develop the curriculum and administer tests.

Both Prime Minister David Cameron and Mr Gove had pledged to scrap the QCDA before the general election as part of plans to cut public sector spending.

And an announcement on this was widely expected on Monday when Chancellor George Osborne set out his deficit reduction plans.

But it emerged that legislation was needed to bring about its abolition and instead its budget was cut by Ã‚£8m.

Mr Gove wants to lessen government involvement in the administration of exams, but it needs staff to continue until the agency's functions can be transferred.

In his letter to Chairman Christopher Trinick, Mr Gove said: "I appreciate that the news of closure will come as a disappointment to those working in the QCDA, as well as to you and your executive team.

"While the QCDA as an organisation does not have a place in the education system of the future, I know that the agency has many dedicated public servants who are committed to improving the quality of education."

He added: "In other areas – notably qualifications development and the curriculum – I would want QCDA to withdraw as soon and as far as is practicable, and continue with activities only where it is necessary in order to comply with a statutory duty or where I am clear that not to do so would jeopardise the interests of learners.

"That is the basis on which reductions to the budget were made this year."

The QCDA was created when the former Qualifications and Curriculum Authority had been split.

The other part of this break-up was the creation of Ofqual, launched in 2008, which remains as the watchdog for exam standards.