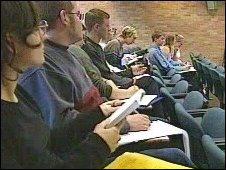 The Business Secretary Vince Cable has called on university bosses to show restraint over their own pay.

Mr Cable said he was "taken aback" to discover that the pay of university vice chancellors had risen by more than 10% last year.

The average salary for university vice-chancellors is more than Ã‚£200,000 per year.

But Mr Cable told the Daily Telegraph the university sector needed to show "realism and self-sacrifice", as managers in the private sector had.

On Monday it was announced that Ã‚£200 million was being cut from university funding in England, on top of a reduction of Ã‚£449m already set for next year.

In an interview with the Telegraph, Mr Cable said: "There is some gap between reality and expectations in some of those institutions and although it is not our job to control pay – it is an independent mechanism – we want to signal to them that there has got to be some restraint," he said.

Mr Cable had been referring to the last official published figures – for 2008-09.

He contrasted the attitude of the university heads with that of managers in the private sector where some were taking pay cuts to help keep their firms going.

"I just get absolutely no sense in the university sector that there is the same degree of realism and of self-sacrifice which is going to have to happen if we are going to preserve the quality of university education," he said.

"There is clearly salary escalation at the top level that bears no relation to the underlying economics of the country."

But university leaders said vice chancellors were showing restraint and that recent data suggested most had agreed to a pay freeze.

Nicola Dandridge, chief executive of Universities UK, said: "Salaries of university heads in the UK are comparable with those in competitor countries and are also in line with remuneration packages for directors and chief executives of public and private organisations of a similar size.

"We are now in quite a different funding climate and our own data on vice chancellors and principals' salaries for this year (2009-10) show the majority of them agreeing to pay freezes.