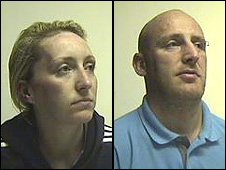 A woman has been jailed for life with a minimum term of 20 years for murdering her boyfriend by shooting him in the head.

Caroline Igoe, 32, killed Martyn Barclay, 26, near their home in The Inch area of Edinburgh in January 2009.

Her brother Paul Igoe was jailed for six years for his part in the crime.

He had been cleared of murder but was convicted of attempting to cover up the murder.