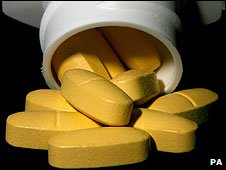 Proposals to give free prescriptions to people in England with long-term conditions have been put on hold due to financial pressures on the NHS.

Health minister Simon Burns said a decision on prescription charges and exemptions cannot be made before the spending review due in the autumn.

Plans for expanding eligibility for free prescriptions were first announced by Gordon Brown in 2008.

All charges have been scrapped in Wales and are being phased out in Scotland.

In England, prescription charges for cancer patients have already been dropped.

Current medical exemptionsContinue reading the main storyA permanent fistula, such as colostomySome patients with hypoadrenalismDiabetes insipidus or other forms of hypopituitarismDiabetes mellitus, except where treatment is by diet aloneHypoparathyroidismMyasthenia gravisMyxoedemaEpilepsy requiring continuous therapyContinuing physical disability which means the person can't go out without the help of another person

Professor Ian Gilmore, president of the Royal College of Physicians, was tasked with considering which patient groups should be exempt from charges and how the changes should be implemented.

In a report first presented to ministers in November 2009, he said patients should be exempt if they have a long-term health condition that will persist for a period of at least six months.

It means the three-year exemption would include people with common conditions, such as asthma, arthritis and high blood pressure, and eligibility would be determined by doctors.

Professor Gilmore estimated the move would cost Ã‚£430m a year.

But he proposes phasing in the changes over a three-year period, to help spread the cost.

His review concluded that the cost of the annual prescription preÃ¢€‘payment certificate, which patients with chronic conditions can buy to help them manage the cost of prescriptions, should slowly be reduced.

The current list of exemptions is "outdated and arbitrary", said Professor Gilmore.

He added that it was disappointing that his review was not published or commented on by the previous government when the financial climate was more favourable.

"I believe it still represents a useful way forward for exempting patients with long-term conditions from prescription charges.

"Furthermore, the report outlines a way in which exemptions could be phased in the fairest way possible when the financial landscape allows it."

A Department of Health spokesperson said they want people with long-term conditions to have more control over their health needs.

"This is why we are focusing on prevention and the reform of long-term care as a whole to give patients better access to treatments that are personalised and effective for them as individuals."

He added: "We know the NHS faces many challenges and therefore any decisions on future changes to the system of prescription charges and exemptions will be dependent on our future financial settlements."

Neil Churchill, Chair of the Prescription Charges Coalition and Chief Executive of Asthma UK, urged the government to outline how they intend to act on Professor Gilmore'sreport.

"People with long-term conditions, such as arthritis, asthma, depression, heart disease, motor neurone disease, Parkinson's and Spina Bifida will obviously be very disappointed to hear that a timetable to abolish prescription charges has not yet been set."