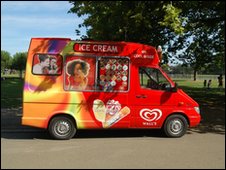 Police in NI have said it was "inappropriate" for an officer to play "ice-cream van" music in an attempt to calm youths attacking a vehicle.

Young people were throwing bottles at a Land Rover vehicle in Lisburn last Saturday when the officer used the tannoy to play the tunes.

A police spokesperson said an officer had used humour to defuse the situation and the trouble had stopped.

However, senior officers are believed to have spoken to the officer involved.

Police were called to Glasvey Drive in Twinbrook on 22 May where they passed a group of about 15 youths who began throwing bottles at their vehicle.

A spokesperson for the Police Service of Northern Ireland said: "An officer used the vehicle's tannoy system to play music to the youths in an effort to use humour to defuse the situation.

"The youths stopped throwing the bottles. However police accept that this was not an appropriate action.

"The officer has been spoken to by a senior officer in order to establish the circumstances of the incident."

"The PSNI are put on the streets to do a serious job and that is to keep order on the streets and face down anti-social elements. This is like a sick joke.

"It goes against everything we are trying to solve and eradicate in the area".