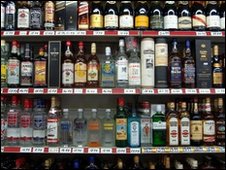 The health committee will outline its views on the alcohol bill

But it is thought the findings will show MSPs divided over the key measure of minimum pricing.

Doctors, the police and the licensed trade back the government's plans to set a minimum price per unit of alcohol, but opposition parties are worried about the measure.

They have said it would also punish responsible drinkers.

She has said in the past that the government needed to take "radical action" to cut the Ã‚£2.25bn cost of alcohol misuse to Scotland.

The report, due to be published on Thursday morning, is set to recommend support for the general principles of the bill.

However, committee members are likely to urge the government to publish its preferred cost per unit of alcohol before MSPs decide on how to go forward.

The report comes the day after Scottish Labour published the findings of its Alcohol Commission.

The recommendations included a legal limit on the caffeine content of alcoholic drinks – which would effectively ban the tonic wine Buckfast.

The party hopes to amend the forthcoming alcohol bill to stop drinks firms using more than 150 milligrams of caffeine per litre of alcohol.