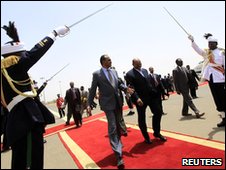 Sudanese President Omar al-Bashir is to be sworn into office again, following his controversial win in last month's elections.

President Bashir is wanted by the International Criminal Court (ICC) for alleged war crimes in Darfur.

His inauguration will be a further clue to how isolated he is internationally.

The heads of the two United Nations peacekeeping missions in the country will also be there.

That gives a sheen of respectability to the event.

President Bashir is a wanted man internationally, after the ICC indicted him for war crimes allegedly committed in Darfur.

But Ibrahim Ghandour, a senior figure in the president's party, said HRW was wrong.

"The Sudanese people can see that Human Rights Watch is unfair to the Sudanese issues in general," he said.

"I think that the first defeat is the fact that at least five presidents are attending the inauguration. And the second defeat came when the UN declared that it would be present at the inauguration of the new presidency term."

Last month's elections, which have been recognised internationally, despite their flaws, may have boosted President Bashir's legitimacy somewhat.

But the president is still clearly not to everyone's taste.

He faces a momentous few months.

In January, Southerners will vote on possible independence, the consequence of a peace deal that ended a long civil war.

President Bashir is calling for unity, but there is little doubt the South will split away if there is a free vote.