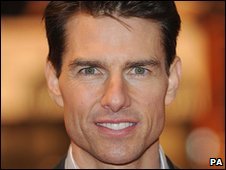 Tom Cruise is expected to attend the ceremony

The stars have started to arrive for this year's National Movie Awards, which are taking place at London's Royal Festival Hall.

The Twilight series of films lead the way with five nominations.

Hollywood actor Tom Cruise is expected to attend the ceremony as his new film, Knight and Day, is up for most anticipated film.

The awards are voted for by the public and the ceremony is being shown live on ITV1.

The ceremony was started by ITV in 2007 but took a break last year, thought to be due to cost-cutting.

Harry Potter And The Half-Blood Prince is nominated in the family film category against movies including Nanny McPhee And The Big Bang, and Up.