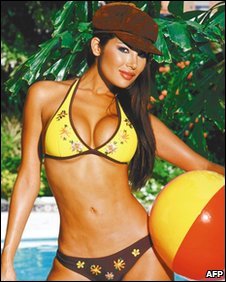 Police had been looking for Ms Sanclemente for months

A Colombian beauty queen has been arrested in Argentina on charges of leading a drug trafficking ring.

Angie Sanclemente Valencia, 31, is accused of persuading young women to smuggle cocaine from Argentina to Europe via Mexico.

Argentine police had been looking for her for more than five months before they found her in a youth hostel in Buenos Aires.

She has denied the trafficking charges.

Ms Sanclemente won the popular title of Coffee Queen in 2000, but had to return it when it was discovered she was married, in breach of the beauty pageant's rules.

Prosecutors say she recruited other young models to travel, often as first class passengers, from Argentina to the Mexican city of Cancun and on to Europe carrying cocaine.

The Argentine press, who have dubbed her "Narco Queen", say she moved to Mexico in 2005 where she became romantically involved with a well-known drug trafficker known as The Monster.

She is believed to have moved to Argentina in 2009.

An arrest warrant was issued for her after a 21-year-old model was found carrying 55kg of cocaine boarding a flight to Cancun, Mexico.

The woman's arrest led to six more alleged gang members, who reportedly told police they had been recruited by Ms Sanclemente.

A lawyer for Ms Sanclemente said she had not turned herself in when her arrest warrant was issued because she feared she could be attacked or raped in jail.