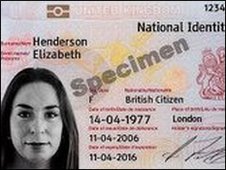 The Home Office is to reveal later how it will abolish the national identity card programme for UK citizens.

The bill, a Queen’s Speech pledge, includes scrapping the National Identity Register and the next generation of biometric passports.

None of the 15,000 people who have voluntarily taken out ID cards since the roll out in Manchester in late 2009, will be refunded the £30 fee.

The Labour scheme was aimed at tackling fraud and illegal immigration.

But it was criticised for being too expensive and an infringement of civil liberties.

The cards that are already in circulation will remain legal until Parliament has passed the legislation to abolish them and the register.

The national identity card scheme involved creating the biometric cards to hold personal data which was encrypted on a chip, including name and fingerprints.

The supporting national identity register was designed to hold up to 50 pieces of information.

At the same time, there were related proposals to put more biometric information on passports, beyond the standard photograph.

To date, some £250m has been spent on developing the programme and scrapping it will save the Home Office about £800m over a decade.

The running costs for the scheme had been expected to hit £4.5bn over 10 years, with most of that recovered from fees.

He said that the card could play a role in combating terrorism, identity fraud, benefit fraud and help people get what they were entitled to in society.

By February 2010, the scheme had been rolled out to Manchester residents and 16 to 24-year-olds in London.

Despite the demise of the national identity card, a separate but technically similar scheme for some foreign nationals will continue. That scheme is run by the UK Border Agency and is still being rolled out.

Some 200,000 cards – known as biometric resident permits – have already been given to migrant workers, foreign students and family members from outside the European Economic Area.

The abolition of ID cards is among measures that the coalition partners have pledged to take as part of a reversal of what they call an erosion of civil liberties.

The other proposals, to be included in a separate larger bill, include reforms to the DNA database, tighter regulation of CCTV and a review of libel laws.