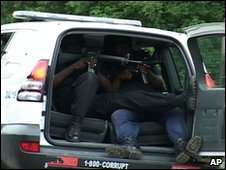 Kingston has seen days of running battles between police and fighters

At least 44 people have died during fighting between police and gunmen in the current anti-drug offensive in Kingston, Jamaica's ombudsman says.

The city has seen days of running battles between security forces and fighters loyal to a suspected drug trafficker sought by the US.

Police, backed by armoured cars and helicopters, have detained 200 people and seized guns in the operation.

He has thousands of loyal followers who have promised to protect him at any cost.

It is believed that some of the civilians were gunmen who were killed while defending Mr Coke, but correspondents say the high casualty figure does raise questions about the heavy-handedness of the operation, which has involved thousands of security officials.

Although police came under heavy fire when they first entered the area to try and arrest Mr Coke on Tuesday, correspondents say the gunfire has died down in recent hours.

Police are currently going house-to-house searching for information about his whereabouts. 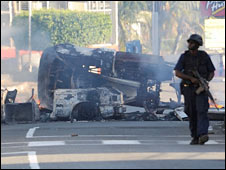 Located on Jamaica's south-eastern coast, far from tourist hub in northBuilt in late 1960s on grounds of a cleared dump known as the Dungle or "dung hill"Warren-like public housing project with population of about 25,000One of Jamaica's notorious "garrison" slums – described as "a state within a state"Power base of PM Bruce Golding's West Kingston constituencyInvaded in 2001 by security forces in search of illegal weapons; 25 people killed in three-day stand-offFour residents died in a similar operation in 1997Witness: ‘We got out fast’Kingston under siegeProfile: Christopher ‘Dudus’ CokeIn pictures: Jamaican unrest

A state of emergency has been in place in parts of Kingston since Friday, when several police stations were attacked.

Since the state of emergency was declared, people have not been allowed out of their homes to get food, water or other essential supplies.

The Red Cross has sent a team into the area with Mr Blair to ensure security forces are facilitating the distribution of emergency goods.

Mr Coke, 41, insists he is a legitimate businessman and enjoys the support of many impoverished Kingston residents who see him as a benefactor.

The US justice department accuses him of being one of the world's most dangerous drug barons.

He is said to lead a gang called the Shower Posse – owing to the volume of bullets used in shootings – and operate an international smuggling network.

He faces a life sentence if convicted on charges filed against him in New York.

The gang has also been blamed for numerous murders in Jamaica and the US.

The BBC's Matthew Price in Kingston says Dudus is seen by many there as a kind of Robin Hood figure.

That is why it is hard to see what happens next, our correspondent adds: The authorities are intent on capturing Dudus, while those loyal to him are intent on stopping that at whatever cost.

The latest trouble started last week when Mr Golding said he was prepared to send Mr Coke to the US on drugs and weapons trafficking charges.

The decision reversed nine months of opposition to his extradition.

Mr Golding had argued that the evidence against Mr Coke was obtained illegally by intercepting mobile telephone calls.

But he changed his mind in the face of growing public discontent, and questions about his possible ties to Mr Coke.

He has denounced the unrest as a "calculated assault on the authority of the state that cannot be tolerated".

Have you been affected by the unrest in Jamaica? Send us your comments and experiences Click here to add comments..

At no time should you endanger yourself or others, take any unnecessary risks or infringe any laws.In most cases a selection of your comments will be published, displaying your name and location unless you state otherwise in the box below. If you wish to remain anonymous, please say so in the box.