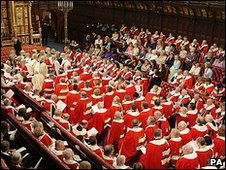 David Cameron’s coalition government is due to outline what laws it wants to pass in the next year when the Queen’s Speech is delivered to Parliament.

Measures are set to include the repeal of ID cards, powers for parents to set up schools, reforms to policing and a referendum on the voting system.

The programme will reflect compromises reached by the Conservatives and Lib Dems when they agreed to share power.

The state opening of Parliament will feature its traditional pageantry.

It will be the 56th time that the Queen has opened a new session of Parliament during her reign.

However, it will be first time in 14 years that she has outlined a Conservative-led programme for government – albeit one that has been drawn up in partnership with the Liberal Democrats following their coalition agreement.

The Queen’s Speech, outlining the government’s legislative priorities for the year ahead, is expected to contain up to 21 bills and comes a day after the government revealed the details of plans to cut £6.2bn in spending this year.

Ministers have stressed that reducing the government’s huge deficit, while ensuring continued economic recovery, will be their priority over the lifetime of the Parliament.

Details of likely bills appeared in a number of Sunday newspapers. Downing Street said it was "disappointed" by the apparent leak but will not hold an inquiry. It is likely that MPs will press for an explanation.

Flagship measures are likely to include plans to scrap ID cards and the next generation of biometric passports and a Great Repeal Bill – regulating the retention of DNA and the use of CCTV cameras among other measures. Ministers say this is needed to curb the excessive state intrusion of recent years and protect civil liberties.

Two education bills are expected to form the centrepiece of the programme, extending the academy school programme pioneered by Labour and giving parents and other groups the right to set up so-called "free schools" in the state sector.

Liberal Democrat proposals for a "pupil premium" to improve schooling for children from the most deprived backgrounds, which could see up to £2.5bn channelled into cutting class sizes, will be included in this.

One of the most complex and controversial bills is expected to cover parliamentary reform, a subject on which all parties agree action is needed after last year’s expenses scandal.

As well as giving the public the right to throw out corrupt MPs between elections, it will legislate for a referendum on changing how MPs are elected from the current first-past-the-post system to the Alternative Vote format.

This was a central Liberal Democrat demand in their negotiations on forming a government.

Plans for fixed-term five-year Parliaments – including a controversial clause requiring 55% of MPs to vote to back the dissolution of Parliament – will also be announced and a review of options for reform of the House of Lords is expected.

Other expected proposals include elected officials to oversee local police forces, the restoration of the link between the state pension and earnings, a tax on bank profits, welfare reforms and a guarantee of a referendum on any treaty proposing more powers for the EU.

BBC political editor Nick Robinson said there was likely to be unease in both Conservative and Lib Dem ranks about aspects of the policy programme but Mr Cameron and his Lib Dem deputy Nick Clegg hoped the inclusion of flagship policies designed to appeal to their own side would quell any dissent.

After the Queen has officially opened Parliament, Mr Cameron will begin several days of debate in the Commons over the plans, which he has said will be underpinned by the goals of encouraging freedom, fairness and responsibility.

Acting Labour leader Harriet Harman will respond for the opposition in what will be their first clash across the despatch box.

The Queen’s Speech will be followed on Wednesday by the first Prime Minister’s Questions of the new parliamentary session and by the government’s emergency budget on 22 June.