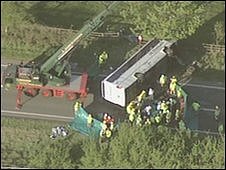 Four people remain in a critical condition after two schoolchildren and a motorist were killed when a school bus hit a car and overturned.

The 49-seater was taking pupils home from Keswick School in Cumbria when it crashed on the A66 near Bassenthwaite Lake just before 1600 BST.

Six helicopters ferried the most servely injured to hospitals in Middlesbrough, Newcastle and Preston.

Psychologists will be at the school later to support pupils and staff.

The two children killed were a boy and a girl who have not yet been named by police, and the male driver of a Honda Civic.

It is believed the driver of the coach, which was run by J.B. Pickthall based in Rowrah, West Cumbria, had swerved to avoid another vehicle when the collision occurred.

Witnesses spoke of hearing "a loud bang" as the coach ended up on its side.

Another witness described that stretch of the A66 as notorious with police regularly called to accidents there.

It is thought nearly 40 were injured, most of them children at the secondary school who were being taken back to their homes in and around the town of Cockermouth.

A spokeswoman for North Cumbria University Hospitals NHS Trust said the majority of the injured were being treated at Cumberland Infirmary in Carlisle and West Cumberland Hospital in Whitehaven.

Their injuries range from cuts and fractures to spinal injuries.

Chief Insp Kevin Greenhow, of Cumbria Police, said his officers and other emergency workers "found a very difficult situation to deal with".

But he described the people of West Cumbria as "resilient" and said they would "gather round and support each other".

Moira Swann, director of children’s services at Cumbria County Council, said her department would offer "all the help and support we can to the children, families and staff affected".

The educational psychologists will be going into the school later which has around 1,000 pupils aged between 11 and 18, to offer practical and emotional support.