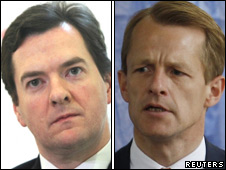 The government is to spell out where it will cut £6bn in spending this year, saying immediate action is needed to start rectifying the UK’s finances.

Budgets for IT, property, advertising and recruitment are expected to be cut, while some quangos could be abolished.

Ministers admit the cuts will be "painful" and Labour say they are a step too far.

Monday’s announcement is the first step in the coalition government’s attempt to eliminate the bulk of the UK’s record peacetime deficit – likely to total £156bn this year – over the next five years.

Deputy Prime Minister Nick Clegg has said its decisions will be "unpopular and controversial" but the government must "hold its nerve" and tough decisions will help maintain spending in key areas.

Some of the £6bn will be reinvested into schemes for employment and economic growth as the UK emerges from recession.

The move comes ahead of the government’s emergency Budget on 22 June and its autumn review of long-term departmental spending when the full scale of future austerity measures will become clearer.

During the election, the Lib Dems and Conservatives disagreed over the need for cuts this year but those differences were put aside as both sides made compromises in their coalition deal.

They agreed to speed up action on the deficit, warning that Greece’s debt crisis and the wider financial instability across Europe highlight the dangers of putting off action any longer.

Monday’s focus will be on "non-priority" areas, with ministers insisting they are clamping down on waste and that services on which the most vulnerable in society rely will be untouched.

But BBC political correspondent Carole Walker said people would still feel the impact of the decisions, and jobs would go in some areas.

The chancellor is expected to announce a saving of £163m from restraining recruitment, including a recruitment freeze across the civil service.

Savings from discretionary spending, which includes consultancy, travel, office furnishing and advertising, are expected to reach more than £1bn and £10m will be saved from cracking down on first class travel for civil servants, our correspondent added.

Budgets of so-called quangos are set to fall by more than £500m, with bodies such as the Qualifications and Curriculum Development Agency – which oversees the national curriculum – and the Young Persons Learning Agency facing big cutbacks or even closure.

The Tories say quango spending has risen by nearly £10bn in the past few years and many decisions should be taken by ministers instead.

The budget of the Department for Business, Innovation and Skills is set to fall by £700m, with "significant cuts" to regional development agencies in the south of England and further savings on the universities budget.

Spending across Whitehall on travel, equipment and consultancy services is likely to be slashed, IT projects put on hold, procurement contracts re-negotiated and government buildings rationalised.

There is also likely to be tighter control over hiring across most departments, with a recruitment freeze in some areas.

Cuts of £6bn would amount to a 1.5% fall in central departmental spending and a 0.8% reduction in overall government expenditure, according to figures in Labour’s last Budget in March.

The coalition has ordered an audit of all spending commitments approved since the start of the year, saying ex-ministers were guilty of profligacy and making pledges they knew they could not meet.

Labour have said Monday’s announcement will be the "first test" of the government’s priorities and argue it will expose their claim to be able tackle the deficit without harming the economic recovery.

They believe cuts should be delayed until the economy is stronger.