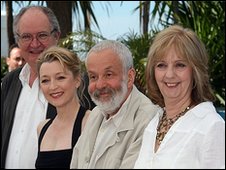 The prestigious Palme d’Or is to be awarded to the best film at the Cannes Film Festival as the 12-day event comes to a climax later.

Movies by British directors Mike Leigh and Ken Loach are among the favourites for honours on the French Riviera.

Edward Scissorhands director Tim Burton leads the jury that will pick a winning film from the 19 in competition.

This year’s line-up has left many critics underwhelmed, but Mike Leigh’s Another Year, starring Jim Broadbent and Lesley Manville, stood out for many.

The portrait of a happily married couple nearing retirement was described as "beautiful, mordant and curiously riveting" by The Guardian, while The Times said it was "a treasure" that showed "Leigh at his confident best". 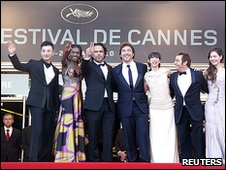 Leigh won the Palme d’Or for Secrets and Lies in 1996, and has become one of the UK’s most cherished film-makers with works including Vera Drake, Happy-Go-Lucky and Career Girls.

Ken Loach, another British arthouse heavyweight, is back in competition four years after winning the festival’s top accolade for The Wind that Shakes the Barley.

His new movie, Route Irish, is a revenge drama based around the deployment of private security contractors in Iraq.

Alejandro Gonzalez Inarritu, best known for Babel and 21 Grams, is in contention with his story of a corrupt policeman who is diagnosed with terminal cancer and attempts to tie up his troubled life.

Bardem has been heavily tipped for the best actor prize for the lead role.

Another festival favourite has been Of Gods and Men by French director Xavier Beauvois, telling the true story of seven French monks who were mysteriously murdered in Algeria in 1996.

A potential dark horse for the Palme d’Or is the Thai film Uncle Boonmee Who Can Recall His Past Lives, directed by Apichatpong Weerasethakul.

It centres around a dying man who is visited by the spirit of his late wife and his missing son, who has mutated into an ape.

Another former winner in competition is Iranian director Abbas Kiarostami, who earned the Palme d’Or in 1997 with Taste of Cherry.

He has entered this year with his cryptic love story Certified Copy, starring Juliette Binoche.