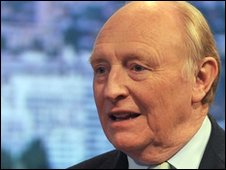 Lord Kinnock has publicly endorsed Ed Miliband in his campaign to become the next Labour leader.

In an interview with the Observer, he describes the former energy secretary as having the electoral "X-factor" and "the capacity to inspire people".

The pair are among six people to have said they plan to stand, with a winner due to be announced on 26 September.

In the Observer interview, Lord Kinnock describes Ed Miliband as a "modern democratic socialist because he has got strong values and he is very practical" and says he has an ability to "lift" people.

He said: "Ed [Miliband] is very bright, including politically bright. He is hugely energetic. He is fluent.

"He has got the capacity to inspire people, which we need. And that marks him out as a special kind of young potential leader.

"I am certain that he is a modern democratic socialist because he has got strong values and he is very practical."

Lord Kinnock said Mr Miliband "has got the X-Factor, especially where the X is the sign you put on the voting slip at election time."

And he also said Mr Miliband’s attitude is "that it is no good wandering around with convictions unless you want to put them into practice, and that really is his motivation.

"And vitally, absolutely vitally, he is comfortable among people of every kind, young and old, men and women, inside and outside the movement.

"We really do need a leader who can reach out for the rebuilding of the Labour party, but particularly to give coherence to our thinking."

Former foreign secretary David Miliband, tipped as the front runner to succeed Mr Brown, has previously urged party members not to make the Iraq war an issue in the race for the Labour leadership.

He said it was "time to move on" after two candidates – including his brother – criticised the decision to invade Iraq in 2003.

Fellow candidate, Ed Balls, has said the war was "wrong", while Ed Miliband said it had led to a "big loss of trust" in Labour.

Rival candidate John McDonnell said their "road to Damascus conversion" was far too late and opportunistic.

Neither Mr Balls, the former Children’s Secretary, or Ed Miliband were MPs when the decision to invade Iraq was made. David Miliband was an MP at the time and voted for the invasion.

The other Labour leadership candidates are former Health Secretary Andy Burnham and backbencher Diane Abbott. The result of Labour’s leadership contest will be known on 25 September.